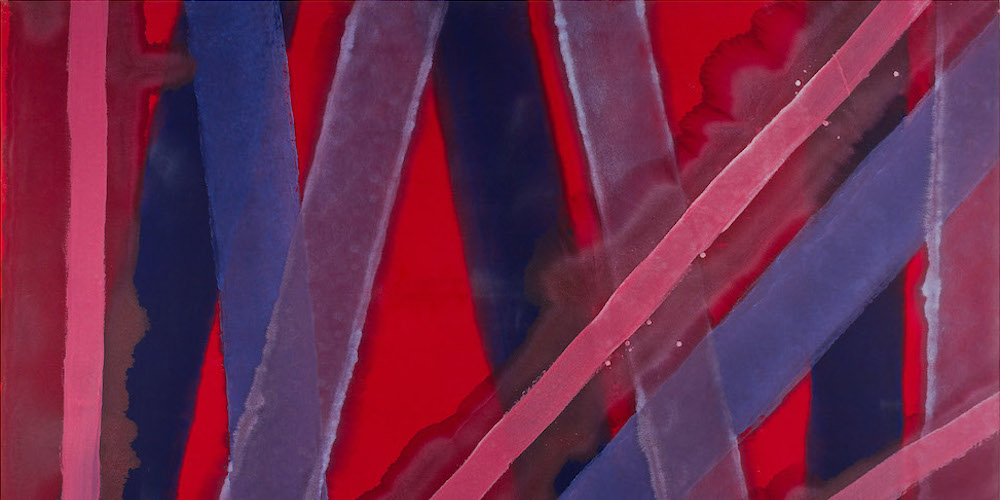 RCM Galerie is pleased to present Abstract Pop, an exhibition of paintings and sculptures by the late American artist Edward Avedision(1936-2007).
Open from November 29, 2018 to January 14, 2019, the show marks the first collaboration between the gallery and the Estate of the artist, who during the 1960s and 1970s was active on the New York City art scene and known for his color-saturated canvases that blend the exuberance of Pop and Op Art with Ancrethe rigor of minimalism and the playfulness of the Color Field school.
His work was featured in seminal shows of the era, including the landmark Responsive Eye at MoMA in 1965. The influential gallery Robert Elkon represented him.
Avedisian was born in Lowell, Massachusetts and attended the School of the Museum of Fine Arts, Boston. His first exhibition was in 1957, at the Boylston Print Center Gallery, Cambridge, Massachusetts.
He then moved to New York City, where became a fixture on the vibrant downtown art scene, frequenting the Cedar Tavern on Tenth Street, associating with the critic Clement Greenberg, and affiliating with the new generation of abstract artists interested in experimentation and freedom.
Robert Elkon assumed representation of Avedisian and gave him a one-man show of his stained canvases with central images consisting of three plumes arranged against a large blot.
By 1963, Avedisian had transitioned to a hard-edge approach, portraying primarily large striped circles. Brian O’Dougherty noted the shift in Avedisian’s work in the New York Times, stating that his “targets woo the eye . . . in a sort of shooting match of afterimages.”
Avedisian was included in the annual of the Whitney Museum for the first time in 1963, and two years later, in MoMA’s, The Responsive Eye. Avedisian was also represented in the Whitney Museum’s Young America 1965 and Expo 67 in Montreal.
In the late 1960s, Avedisian started painting large-scale canvases with vertical, overlapping stripes in rich colors In1970, a solo show of his work was organized by the Bucknell University Art Gallery, Lewisburg, Pennsylvania.
In 1971, Avedisian was included along with Walter Darby Bannard, Dan Christensen, Ron Davis, Larry Poons, and Peter Young in the exhibition Six Painters, organized by the Albright-Knox Art Gallery in collaboration with the Baltimore Museum of Art and the Milwaukee Art Center. In the 1970s, he left New York City for the Hudson Valley and his style became more representational.
Avedisian’s work is held in the collections of the Albright-Knox Art Gallery, the Brooklyn Museum, New York, Buffalo, New York; the Denver Art Museum; the Flint Institute of Arts, Michigan; the Jack S. Blanton Museum of Art, Austin, Texas; the Metropolitan Museum of Art, New York; the Neuberger Museum of Art, Purchase, New York; the Parrish Art Museum, Water Mill, New York; the Portland Art Museum, Oregon; the Smithsonian American Art Museum, Washington, D.C.; the Solomon R. Guggenheim Museum, New York; the University of Michigan Museum of Art, Ann Arbor; the Weatherspoon Art Museum, Greensboro, North Carolina; the Whitney Museum of American Art, New York; and the Yale University Art Gallery, New Haven, Connecticut.