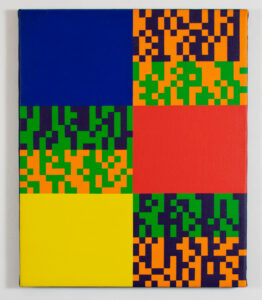 Jean-Claude Marquette, instrumental in founding France’s pioneering Groupe d’Art et Informatique de Vincennes, or GAIV, which sought to use the computer to program art, used the computer in this way — to create variants of language. At a time when when computers offered little means of working in color, the GAIV — made of two couples, Fanie and Jaques Dupré, Monique Nahas and Hervé Huitric, and two men named Jean-Claude: Hagland and Marquette — became known for their experiments with coded colors.
GAIV’s artists were interested in the flux between the rational and irrational that the computer afforded them. While their German counterparts explored mathematical relationships of chance in logical structures and the Americans mostly came to the computer from an engineering point of of view, the GAIV deployed the computer for détournement, or using it for what it was not meant.
This explains why much of their work required the manual intervention of the artist. The Huitrics, the Duprés and Hagland all printed matrices with color codes that they painted by hand. Jean-Claude Marquette, for his part, added a literary twist by taking a poem by Russian futurist Velimir Khlebnikov “Incantation by Laughter,” and subjecting it to a coded algorithm and transforming it into a binary rhythm that he then reproduced in paintings, drawings and prints with different variations and forms.
Like his cohorts in the GAIV, Marquette used the computer to visually stimulate the work’s semiotics. After programming and printing out his codes, he painted the results in acrylic on canvas or acrylic on card. Members of the GAIV remained committed to the art object itself.
Marquette’s work earned him recognition. He exhibited at Tendencije 5 in Zagreb in the Computer Visual Research section with other member of GAIV and the most important international artists working with computers, including Herbert Franke, Manuel Barbadillo, Otto Beckman, Waldemar Cordeiro, et al.
For all the interest that this movement engendered, its time in history was circumscribed to a brief moment. Most of the artists who participated in New Tendencies only resurfaced over the last two decades. New Tendencies artists working with computers spent a longer spell floating in the purgatory of art history’s collective amnesia. With art and science now an important topic in contemporary art, the work of the often overlooked pioneers has gained new interest.
One need look no further than the Binary paintings by an artist like Tauba Auerbach to see that today’s scene still finds currency in the experiments of these early computer artists. The difference between the two (which put side by side are strikingly similar) is fifty forgotten years. Our show of Marquette’s work was the first one-person show in almost fifty years.
Recently, the Pompidou Centre in Paris bought the three paintigs of his exhibited in Coder Le Monde (2018) and the ZKM museum in Karlsruhe, Germany showed a series of his prints.
Marquette, an unassuming man of 74, has done little to promote his historical work. He has been working as a computer consultant and quietly plying his artistic interests, most recently examining artistic adaptations of QR code.
Marquette believes ideas are programs for possible aesthetic interventions. That it is realized in two dimensions matters little. Much of what he created he destroyed as the steps to finding a full manifestation of an idea were superfluous in his view.
“It is between these two realities (rational and irrational) that the truth travels incessantly,” says Marquette. “A truth always relative and elusive. A truth that overtakes us, agitates us and makes us eternally question ourselves without being able to forge an answer, but always betting on the hypothesis and touching something free, ineffable and unseen, rich experience for the unlimited experience of a moving and agitated humanity.”