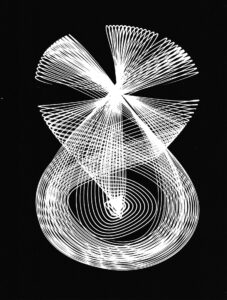 Trained as an engineer, Vitkine was born in Berlin of Russian immigrant parents and spent his childhood in Copenhagen, before moving to Paris in the 1930s. When World War II erupted he joined the Foreign Legion and although he was considered stateless and the holder of a Nansen passport, he eventually joined the British Army, fighting in North Africa. He returned to France after the war, where he finally was offered citizenship. By the early 1950s, Vitkine had foregone work as an engineer to become a photographer. He was a member of the Club des 30 x 40 , created by Roger Doloy, where he developed a highly personal style of black-and-white photographs of industrial silhouettes, some of which made their way into collections such as the French National Library.
By 1960, Vitkine had created the method to meld his passion of mathematics and engineering to photography, in the meantime becoming one of the pioneers of generative photography. Generative Photography is a term coined in Germany in the late 1960s to denote photography not concerned with the reproduction of images but the “generation” of new ones, often with the help of machines and mathematical methods.
To that end, Vitkine began using an oscilloscope and sine wave generator in 1960.
How did it work? “I hook up the oscilloscope to a generator and an image appears on the screen,” recounted the artist in an 1986 interview for the Cité des Sciences in Paris. ” I regulate the generator and the oscilloscope to modify the image. I calibrate it to produce the lines that interest me the most. When the image reaches my specifications I photograph the screen. ”
“In my spirit, true creation must be singular, different from what exists,” he wrote in 1982 for the catalogue “Une Autre Photographie.”
“The basis of my creation is a quest for simplicity — a minimal style. I want to show as few details as possible. A quest for originality should not be considered an endgame. The aesthetic result is much more important.” “What if I used paper and pencil,” he wrote in 1981 for the Revue Fran aise de l’Electricité . “The possibilities of the pencil should be unlimited, but the speed of the line is about a decimeter per second, while the oscilloscope is measured in kilometers per second. For the pencil, the limit is quantitative for long lines.”
He continued, “Let’s compare the quality of the lines. The manual line appears unaesthetic to me because my hand is not sure and the lines irregular. The electronic line, meanwhile, appears nicer. Even highly varied curves show no discontinuity or irregularity. Conclusion, I abandon manual drawing for the electronic.”
Vitkine’s pursuit of new methods led him to make his own equipment, using a discared T.V. set to create analog signal generators with tubes. He also created a sonoscope to trace sound waves. By 1967, he had made the film Chromophonie with his primative analog equipment, one of the earliest examples of digital animation.
Vitkine also found new applications for his electronic forms. He created a computerized system — a digitally controlled machine — to make sculptures using mathematical formulae. He fed the formula into his computer and it activated a milling machine that carved a wooden block into a sculptural mathematical form.
He founded in 1992 with Christian Lavigne Ars Mathematica to promote the interconnection between art, science and technology. The goal was to unite artists, architects, engineers and industrialists in the field of computer science. It organized the first World Wide Computer Exhibition in 1993 in Paris.
“Intersculpt 95,” the second show, used a transatlantic video conference between Philadelphia and Paris to create the first telesculpture, sent via Internet and materialized in Paris.
Vitkine’s reputation as a pioneer in the field of digital art had grown.
Frank Popper featured him in his landmark show Electra in 1983 at Paris’s Museum of Modern Art. It was only in the last few years though that taste really caught up with Vitkine’s avant-garde vision. The Pompidou Centre in Paris aquired and exhibited his work in 2015 and Vitkine featured in Tate Modern’s 2018 show Shape of Light, a survey of 100 years of abstraction in photography.
Vitkine almost lived to see his work gain wider acceptance.
He died in 2014. He was 104.