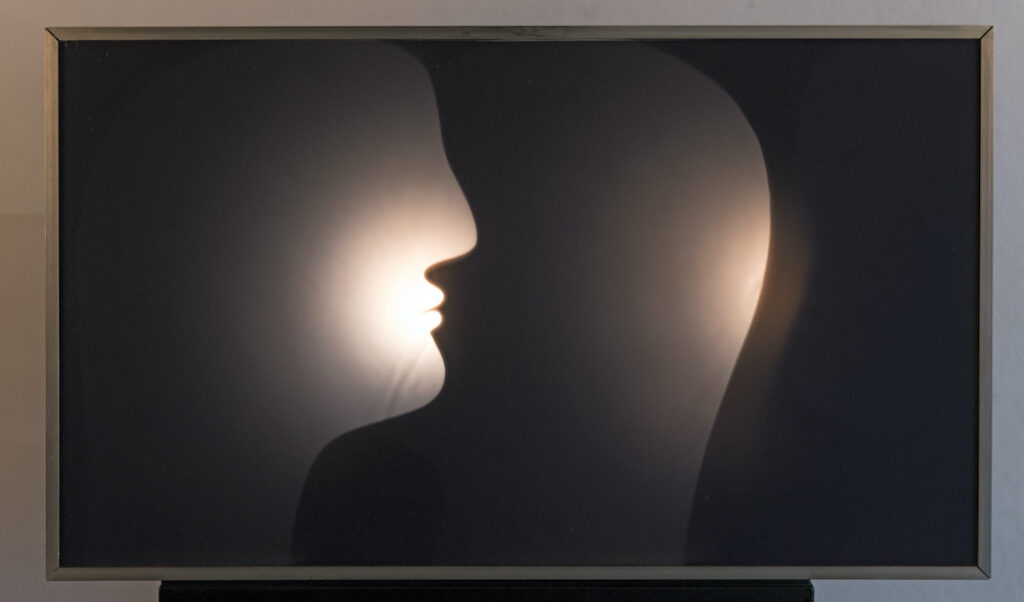 Valerios Caloutsis was born in 1927 on the island of Crete, of Greek parents. (His mother went to London to study under the painter Sickert and later helped to rescue the art and craft traditions of her native land.) Caloutsis studied at the Ecole des Beaux Arts in Athens and later at St. Martins School of Art in London; he settled in Paris after a period at the Beaux Arts in that city. He regularly exhibited in London as well as on the continent.
His earliest work was landscape, largely in monochrome. Within a few years he withdrew from two-dimensional painting and, influenced by his early fresco training, began to work in relief using metals, plaster and glue to achieve rich textural surfaces. But like many of his fellow artists, a further disenchantment with the traditional art object gradually became evident.
In 1966 he felt he had come to the end of this particular road. He taught himself electronics and began to build machines that moved in cycles of light and projected a series of shadows and reflections on a cyclorama. The machines became more complex, producing patterns which were more sophisticated in form, in time sequence and, eventually, in color; the projection surface being either a translucent screen or an adjacent wall. These “Kinoptic” boxes, as he named them, take on a new, almost theatrical context. One can imagine their unlimited use in indoor and outdoor spaces as a means of creating mood or excitement for the public. Another series of kinetic works, visually more mathematic in character, are concerned with linear interplay and vivid kaleidoscopic effects.
Caloutsis did not denied the individual and mysterious nature of artistic creation; he retained his own personality despite the fact that he employed mechanized and scientific means to express it. Notwithstanding the artistic individuality of his work, there is a clear striving for a role, for a purpose, for a direct contact with the public at large.
Charles Spencer (1921-2010), art critic
Selected Exhibitions
1960 “Twelve Greek Artists”, Redfern Gallery, London
1962 “Peintres et sculpteurs Grecs de Paris”, Musée d’art Moderne, Paris
1968 “Kinoptics”, Redfern Gallery, London
1968-69 “Avant-Garde Griechenland”, Berlin, Stuttgart, Frankfurt
1969 “Light and Movement”, Oslo, Helsinki, Copenhagen
1971 “Réalités Nouvelles”, Paris
1972 “Jeux de Lumière et Animation”, Galerie Lacloche, Paris
1973 “Grands et Jeunes d’Aujourd’hui“, Grand Palais, Paris
1973 “Communication 73”, Desnos Gallery, Athens
1975-80 FIAC, Paris
Public Collections
National Gallery of Melbourne, Australia
City of York Gallery, England
Leicestershire County Collection, England
City Art Gallery, Toledo, Ohio, USA
IBM Europe Collection, Paris
Greek National Gallery of Art, Athens